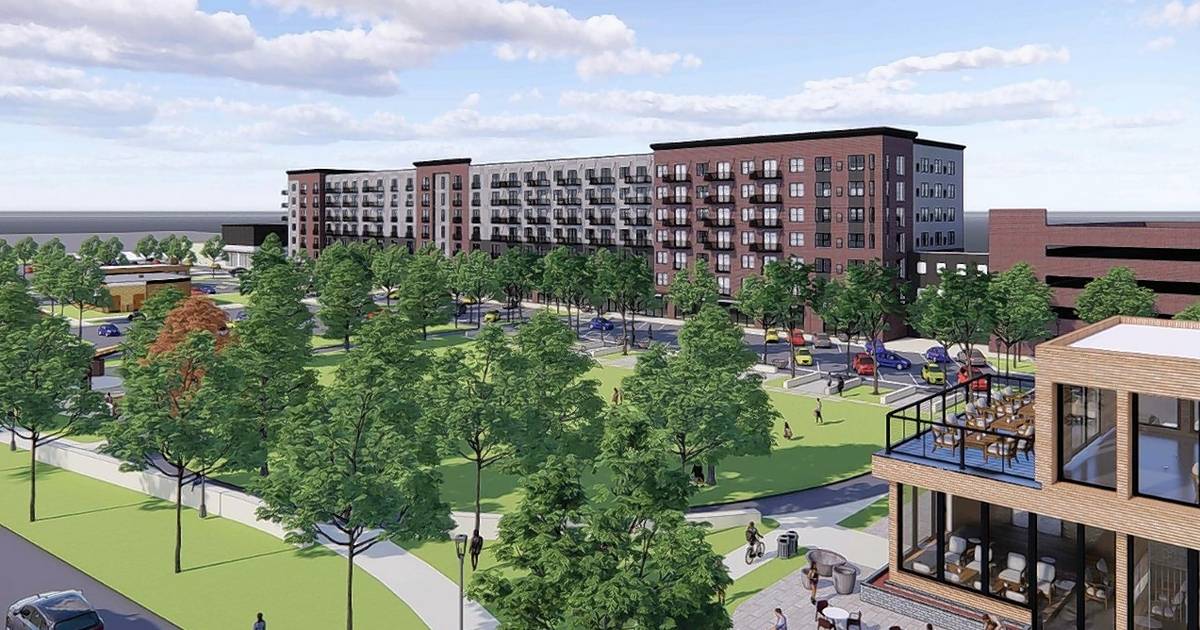 The plan to revamp Buffalo Grove’s Town Center as a $150 million mixed-use development cleared a major hurdle Wednesday, when the village’s planning and zoning commission granted the proposal a unanimous recommendation.

The panel’s 7-0 vote, with one member absent, moves the plan to the village board, which has final say on the project. The board will take it up April 18.

Commission members said they see the plan to turn the struggling shopping center at Lake-Cook and McHenry roads into a new development called “The Clove” as an opportunity to correct a long-standing civic error.

“I do think it revitalizes an area of town that has been the butt of a joke,” Chairman Frank Cesario said,

The proposal calls for what developers have called a “modern central entertainment and residential district” featuring a grocery store; a seven-story, 275- to 300-unit apartment building with 16,000 square feet of commercial space on the ground floor; 65,000 square feet of retail and restaurant space scattered throughout the site; and a “Central Park” for artistic and civic events.

As part of the proposal, Kensington would receive as much as $24.75 million in financial incentives from the village through a tax increment financing district, where property tax money above a certain point would go into the development rather than local governments.

The vote Wednesday followed a public hearing that gave developers Kensington Development Partners and UrbanStreet Group a chance to elaborate on their vision for the 20-acre property.

“Our ultimate goal from day one was to create this one-of-a-kind, eye-catching mixed-use project, which creates an interest and complements the surrounding developments,” said John Schoditsch, a principal at Kensington.

Bob Burk, managing partner of the UrbanStreet Group, compared the plan to his company’s redevelopment of the former Motorola Solutions campus in Schaumburg as a mixed-use development known as Veridian.

“It’s not dissimilar from this, other than its scale,” he said.

“(It) will serve as a catalyst for the rest of the redevelopment of the Lake-Cook corridor,” she said.

Cesario praised the public green area that will replace a swath of asphalt on the site.

“How many times do we have a development where we make it greener than it currently is?” he asked.

“Having been around when the Town Center was actually built, it looks like we’re finally getting it right,” Commissioner Adam Moodhe said.

“Our marketing department liked the name. We think it conveys a rich, warm, vibrant atmosphere, a spice of life,” Schoditsch replied.

Also at the hearing was a representative of a future tenant, the Mexican restaurant Guzman y Gomez. The Australia-based chain recently opened its first North American restaurant in Naperville and also has locations planned in Schaumburg and Crystal Lake.

Although the public hearing was well-attended, few residents voiced concern about the project.

Ford Culbertson of nearby Deerfields Bakery said he is concerned about whether Old Checker Road, the only access to his business, would be closed. And Rich Kane, a member of the board of the neighboring Turnberry condominiums, had questions about hours of construction and the impact of signage on the seven-story building.